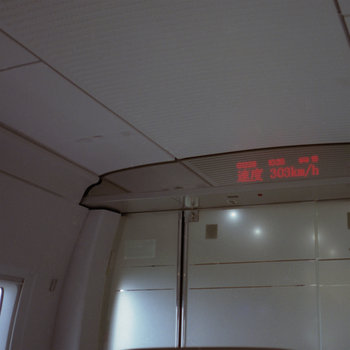 A week before leaving, I bought a dictionary and phrasebook.

Covered in rain, during the days and even the nights, Shanghai was lit in a glow, a mist turning to a constant grey fog. Buildings lined with neon and lcd screens flashed, and from around corners and behind buildings, the night was illuminated much the same as the day. Cars separated the classes, their horns voices punctuating the streets, as pedestrians in groups loosely scattered the streets, talking and walking on speakerphone.

Standing by the metro escalators, there in the square with the overhanging trees of a park, there is construction all around. The buildings seem to be climbing into the darkness at this very moment. Leaving behind and moving forward. We seem to know everything already, our illusion of experience. I imagine taking your hand, I imagined taking your hand, and the lights in the subway flicker as we go deeper. Transit bookmarks each experience, every daydream, and in the end they're interchangeable and indistinguishable between reality and imagination. Try to remember which is real.

To Hangzhou the maglev reached 303 km/h, the towering apartment buildings hunch under construction, passing by in blurs on the flat farmland landscape. I fell asleep, as you were dancing but to no music. The lilies on the lake nodded in the rain, dipping into the water. There was a Wal-Mart near the hotel where I won a pink bunny from a claw machine. I remember the beauty of the architecture of Hangzhou station, birds swirling around the pillars near the top, the echoes of the deep station interior, and the laughing at being lost. There at least we have each other, that memory, or that daydream.

Everything moves faster than we can control. Days are just flashes, moments are mixed up but burned on film, and all of the places and times are out of order. If it could only be us, only ours. If it was ours, if it was us. Sometimes everything goes faster than you can control and you can't stop, much less understand where you are. I bought a dictionary and phrasebook, but "xièxie" (thank you) was the only word I ever got to use.