Natural Snow Buildings: Between the Real and the Shadow

A few years ago, when I lived in Boston, a WZBC DJ nearly made my head explode with his inspired decision to play a full 45-minute side of Natural Snow Buildings' crushing drone epic Slayer of the King of Hell in the middle of the day.¬† The band sounded like absolutely nothing that I had ever heard before and I immediately resolved to find out absolutely everything I could about them and track down all of their albums.¬† Both endeavors wound up being much more difficult than I had anticipated.

Mehdi Ameziane and Solange Gularte met as university students in Paris in 1997 and began recording together as Natural Snow Buildings about a year later.¬† Since then, the duo has released a steady stream of increasingly brilliant albums both collaboratively and solo (Mehdi as Twinsistermoon, Solange as Isengrind) on an array of small labels.¬† Many of their earliest albums are essentially impossible to find now, having been originally issued in extremely limited editions of 50 or less (and sometimes only just for friends).¬† Consequently, their emergence from the shadows of obscurity has been a long, slow process.¬† Thankfully, due to the efforts of some sympathetic labels, their more recent output is considerably more readily available, yet their philosophy towards self-promotion has not changed much at all: Solange and Mehdi abandoned Paris for the small town of Vitre, rarely play live, and rarely do interviews.¬† Natural Snow Buildings are a band that have attracted a devoted following simply by quietly making incredible and unique music year after year. 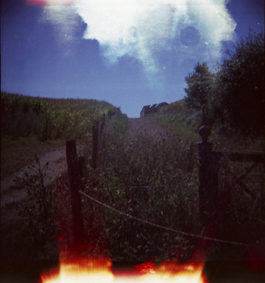 This interview was conducted with Mehdi and Solange via email over the course of a few weeks in October 2010.¬† It is a bit lengthy, but could have been far longer, as I have been fascinated by the enigmatic twosome for quite some time and had no shortage of curiosity.¬† In fact, it is only through sheer force of will that I was able to keep it this brief and refrain from exhaustive examinations of things like that ad-hoc exegesis that Solange has been working on.

Where did your interest in exotic instruments originate?¬† Do you have a relatively static collection or is it constantly evolving?¬† Do you ever go to great lengths to track something down?

What do you mean by "exotic?"¬† The culture where the instrument comes from, or the way the instrument works and sounds? What about bagpipes, Ondes Martenots, and theremins?¬† Can you consider them as exotic instruments despite the fact that they originate from western society?¬† Sorry, I digress; it's just that, the word "exotic" seems so relative, and false as a category to describe instruments from all over the place.¬† Back to your question, it's like you're asking us where our interest in instruments in general originated.¬† Why does someone love music?

It depends on the money we can spend on new instruments at one moment.¬† No, we are not collectors of instruments. The instruments we possess are cheap and they do great.

My apologies- that question could have been worded much better, as "instrument collector" has some rather unfortunate shallow/middle-class connotations.¬† However, even within experimental music, the breadth of your multi-instrumentalism is pretty unusual (woodwinds, strings, eastern instruments, obscure western instruments).¬† I was curious about what drove you to go so far with it.¬† For example, do you begin working on a piece and realize that there is a sound you want that can only be achieved by a bagpipe, leading you to go find one and figure out how to play it?¬† Or do you find an inexpensive bagpipe somewhere and think "This is an excellent find... I wonder how I can use this?" More succinctly, is your esoteric instrumentation driven by necessity or curiosity?¬† If it is necessity, do you avoid resorting to synthesizers/samplers out of a desire to be organic/authentic or is it just a simple sound quality issue?

We could not plan in advance how one specific instrument will sound in our own specific environment.¬† We have never thought things like: "Mmmm, this tune is lacking a bagpipe, let's go find one...what about some tampura?" The second option¬†would be¬†the one- it's much more driven by our curiosity about one particular haunting¬†sound we could have heard somewhere.¬† But it's also a necessity, as we¬†never EQ while we mix (if we can still call pushing a button and leaving the room to do something else "mixing").¬† We only use effects during the recording process itself, so we rely a lot on the intrinsic sonority of one instrument, even if it's distorted‚Ä¶how they could be married with each other without being forced into one another.¬† Now, we could use synthesizers, as the mix of acoustic and electronic sounds has always interested us, but they're expensive pieces of technology (when compared to one hulusi, for example).

On a related note, you seem to have absorbed quite a bit of traditional music from the Celtic Isles, India, and other far-flung locales.¬† Have you actively studied folk/indigenous music from other cultures?¬† Are you influenced at all by French music? 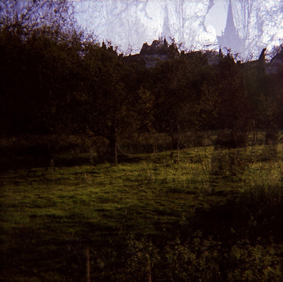 We don't consider ourselves as active students of music; we just listen to music/artists that catch us.¬† Our music is open to any influence. It‚Äôs a great part of our life to dig for new sounds. They can come from France, Sudan, Ethiopia, India, USA, Japan, Indonesia geographically; or from various ethnic communities culturally‚Äì we'll listen to it with the very same ears.¬† They are all important in our musical ethos independently of the genre they can be filed under.

How often do you play live?¬† Is it only at occasional festivals?

Not much. When we‚Äôve been invited somewhere, we've usually gone.

More importantly, how do you play live?¬† Most of your music seems like it would be very hard to replicate.¬† Do you have actual set lists or is it more improvisatory?¬† Do you enlist other musicians to help?

Our very problem is the mix of loud electric instruments and acoustic ones, a goal pretty hard to achieve on stage.¬† So we've done acoustic-only sets or electric-only sets. It‚Äôs a mix of written songs and improvisations.¬† We have never enlisted other musicians to play with us, as we wouldn‚Äôt be Natural Snow Buildings anymore if we did‚Äì we would be another band.¬† At least we would hope so‚Ä¶

I've never heard your very early self-released cassettes.¬† Have you always had a very definite idea of how you wanted to sound or were there some growing pains, fumblings and false starts at first?

Yeah, a mix of noise/ambient and acoustic music with songs and a cinematic, pop, and experimental feel‚Ä¶ And scarily, our first tapes sound a lot like a damaged version of what we are producing now‚Ä¶ 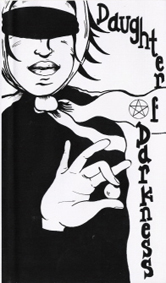 Which albums of yours are you most proud of?

We like Daughter of Darkness because it's totally improvised, no overdubs and totally self-indulgent, and Blackest Rainbow did a great job with the packaging (a VHS box with five tapes inside).¬† The Bride of the Spirits 7" we did with Dull Knife- Alison Scarpulla's photos are amazing.¬† The Hollow Mountain vinyl version on the same label is another favorite: with its silk-screened gatefold and wonderfully printed booklet‚Ä¶ I like ‚Ä¶Then Fell the Ashes too because musically, it's kind of discreet, and artwise, it's simple and wonderfully realized‚Ä¶ but we think we like everything we have done so far‚Ä¶ We wouldn't wish our albums to be different‚Ä¶

Most of your albums are released in very limited quantities and tend to sell-out quite rapidly.¬† What role do you play in the actual commerce/distribution end of your music?¬† Is it something you actively try to avoid?¬† What are your expectations when you finish an album?

Our role in the commerce/distribution end is a very small one, as it's up to the labels we work with.¬† We're not disinterested in the process