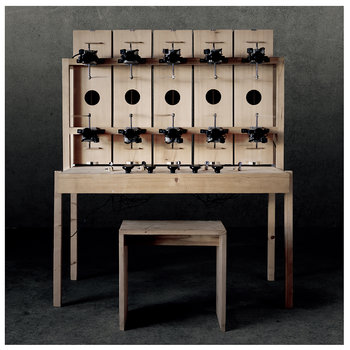 Subtly changing overtone layers and fragil polyrhythms based on the Ventorgano, a self-developed electroacoustic synthesizer.

The Ventorgano consists of guitar strings, wooden resonating bodies and converted fans which use cello-bow hair instead of propellers to set the strings into oscillation.  Rotating speed, string tension and attack can be adjusted progressively, allowing the player to control micro-rhythmical elements and subtle changes in the overtone spectrum.

As in Trobollowitsch's previous works, the production process of the Ventorgano is based on improvisations to be used as basic materials. The two pieces, as heard in the album, were developed by a later processor selecting, combining and cutting these basic materials, always by maintaining the nature of the instrument and focusing on the gradations in-between rhythm and drone.