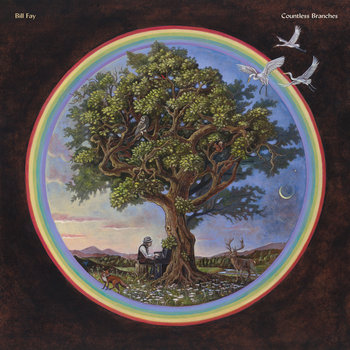 Fifty years after his debut release, Bill Fay – one of Britain's most enigmatic and celebrated singer-songwriters – returns with a new album, Countless Branches. Countless Branches will be released January 17th on CD, LP and Deluxe 2xLP, featuring artwork by Benjamin A Vierling.

Sounding more sparse and succinct than his previous records, Countless Branches collects compositions drawn from the trove of material Fay has amassed over 40 years. Unfinished songs emerge with newly written words and melodies on Fay's recurring themes – nature, the family of man, the cycle of life and the ineffable vastness of it all – as if they had been lying in wait to find their place in our current zeitgeist. The resulting ten songs are as pointed and poignant as anything he has ever recorded.

His third release for the label, alike previous acclaimed recordings Life Is People (2012) and Who Is The Sender? (2015), was produced by Joshua Henry – with the cast list slimmed down from previous sessions. Guitarist Matt Deighton remains as Fay's trusted MD and the musicians have mostly all played on Fay's albums in the past. But both Henry and Fay thought that, this time, there should be more of Bill on his own at the piano, or with minimal accompaniment.

It's at the piano, alongside some rudimentary home recording equipment, where Bill has been composing music in the intervening decades between his first and most-recent album at every chance he could get. His newest material retains the awestruck, inquisitive feel of those early songs. They often evoke landscapes, ancient and sacred places, as their author traverses the outdoors to marvel at it all. And he is doing it all from that corner of his room at the piano, while the word about his work continues to grow and spread like so many branches. For decades now, Bill Fay's songs have been his ambassadors.
While still reluctant to play live or make public appearances, Fay's resolve and his purity shine through the work and make him a special artist, finding his wider world from that corner of the room – and long may he continue to do so.