The box cover depicts what could be a strange retro-digital flower with Buddhist temples pictured in the background. The writing is entirely in Chinese, with something which loosely translates as "electronic prayer machine" on the spine and on the back a list of good things about buddhism (being nice to others, not killing, etc,...) and the all important "Made in Hong Kong."

Two stickers are on the back, one indicating which color machine is contained within (mine is white), the other with the tracklist. There's nine titles which correspond to the nine loops on the little box known as the Buddha Machine, all of which are serene and meditative, perhaps originally intended to to accompany a prayer session, but as a portable machine, its uses can be widespread. For me it has already provided some office ambiance and a perfect bit of aural background to doing some reading at home. 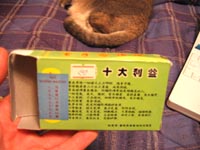 Turn the volume up and it clicks on and the sound comes alive. The switch on the side with the arrows runs through the cycle of tracks 1 through 9, always starting at 1 when the unit is turned on no matter where it left off.

The first one, "Horse" is languid and almost cinematic, slowly shifting back and forth between two main tones. The second one, "Gu Zhang" (a 21-stringed Chinese instrument) also shifts back and forth between two short movements, played on Gu Zhang I'm assuming. The third track carries the name of the Chinese mouth organ, the "Sheng," but this is the first track which seems to have more than a couple notes including a background accompaniment, slightly resembling a mouth harp. Whether or not the main instrument being played is actually a sheng could be anybody's guess as the sound quality is fairly poor. Track four is "B1" and is simply a chord which could be performed on a keyboard instrument repeated over and over again. Track five, "Goat," is a short and spritely melody performed by or mimics a wind instrument, at least an instrument that can only play one note at a time, however it's put through delays and could just as easily be entirely electronic. Track six is named "Xiao," which is an instrument made of bamboo with an over 2,000 year old history. Once again the melody is short, this time consisting of only three notes, but it's a descending melody and noticably more reserved than its predecessor. Track seven, "Zhoun," is only two delay soaked notes but is the track all Labradford fans will end up on for hours as they drift away towards inner peace. Track eight, "B2," isn't much like "B1," except for the origins of the sounds are difficult to pinpoint as they're complex: the loop is longer, and there are more sound sources in the entire mix. The final track, "Dance," isn't much of a dance and actually gets quite annoying. Perhaps this is the loop that the new age store owner puts on to get the weirdos to leave before they start meditating on her floor.

This is debatably (depending on who you ask) the first in a series of sound boxes to be produced by FM3 and distributed to the geeks who listen to anything Staalplaat tells them to. Be warned of a few things however. The stereo jack which has the little headphone symbol doesn't make the sound any better: it's easier to simply listen without headphones as the sound is entirely monaural. The unit is delicate and can bend in pitch and sound like it's dying when squeezed too hard. The 4.5 AC in might seem like it fits your Sony 4.5 AC adaptor for that Discman you no longer use thanks to your iPod, but it doesn't and it won't work. And finally, there's absolutely nothing authentic about this unit: this is -not- music captured in a Buddhist temple and boxed up for western consumption. In fact, that mere idea flies in the face of buddhism to even take such a sacred element and profit off it. It is a very neat little toy for the easily amused music über-nerd.

Sunburned Hand of the Man