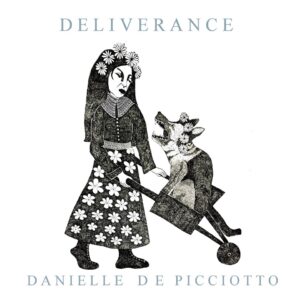 Danielle de Picciotto was born a nomad on the US Army base at Ft. Lewis in Tacoma, Washington. Thus her journey started, moving from one base to another for years.

In 1987 she moved from NYC to Berlin to initiate the Berlin Love Parade together with her then boyfriend Dr. Motte, to create the Ocean Club with Gudrun Gut, one of her longest standing collaborators, to be engaged to the late Roland Wolf of the Bad Seeds, to become the renowned singer of the Berlin band Space Cowboys, to exhibit her art and films internationally in multiple museums, and from 2001 to start collaborating with Alexander Hacke, founding member of Einstürzende Neubauten.

They married in 2006 and with him her travels continue! The artist couple gave up their home in Berlin 2010, and have been touring the world since.

Danielle de Picciotto’s new album Deliverance speaks of these travels and the state of our world from an eagle’s perspective. Despair and hope lie side by side, mirroring the dark shadows and beauty she has experienced on her journey. Her music is a mixture of spoken word, electronic soundscapes, melancholic violin harmonies, and surreal choirs, moving back and forth from experimental sounds to beautiful melodies managing thus to blend hope and despair into a cosmos of constant flux.

Imagine Laurie Anderson dancing with This Mortal Coil in a strange wasteland of dreams and sounds, that is Danielle's universe. It is one that faces reality and its challenges with mystical, dreamlike wisdom, discovering solutions in unexpected alcoves, offering hope and wonder as an alternative.

The album, a limited edition of just 150 pressed on black vinyl presented case bound with 24 pages of the art she has created during her years of traveling including a hand-numbered and signed screen print.

Her black and white ink sketches that also overlay colourful backgrounds, reveal her personal state of mind and emotions in a college of images and textures that expand her musical visions into a fascinating three dimensional experience.