Death And Vanilla, "To Where The Wild Things Are" 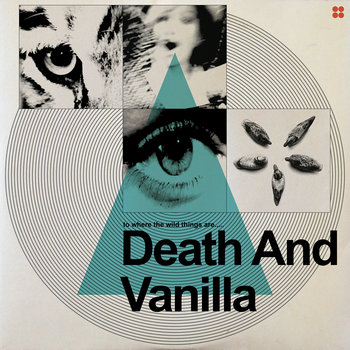 Formed in Malmö, Sweden by Marleen Nilsson and Anders Hansson, Death And Vanilla utilise vintage musical equipment such as vibraphone, organ, mellotron, tremolo guitar and moog, to emulate the sounds of '60s/'70s soundtracks, library music, German Krautrock, French Ye-ye pop and 60s psych. They revel in the warmth of older analogue instruments to create a more organic sound, each loose wire and off-kilter noise adding to the rich atmosphere.

After a handful of successful releases including a debut EP in 2010, their self-titled LP in 2012 - which sold out on pre-order - and a beautifully designed 7" single, the experimental pop duo were invited to compose a live soundtrack for the classic horror film, Vampyr (1932), for the Lund Fantastisk Film festival in Lund. Now, newly signed to Fire, the band return with To Where The Wild Things Are. Named after the Maurice Sendak children's book, the album is comprised of pop music with a wild, dreamy and experimental edge, celebrating imagination and the ability to travel to stranger recesses of the mind.

Where the Wild Things Are starts off with some of the most "pop" songs they've ever recorded, typified in the sweet and melodramatic "Arcana," and the classic pop inspired "Time Travel." Like Sendak's book of the same name, the album then proceeds into stranger and stranger territory, resulting in some of the most experimental material Death And Vanilla have produced, such as the six-minute "Something Unknown You Need to Know" and the machine-like, surf-guitar track "The Hidden Reverse."

The band recorded the new album themselves in their rehearsal space, using just one microphone - a 70's Sennheiser - which they bought at a flea market for a tenner. It is this unconventional recording process that gives Death And Vanilla their unique personality; using a trial-and-error approach to recording has rewarded the album with a strangeness that would not have otherwise been achievable.

Creating deliciously enticing soundscapes, full of moody Moogs, swirling melodies and breathless vocals, their influences on To Where the Wild Things Are are apparent and diverse, ranging from Ennio Morricone to Scott Walker, Tom Dissevelt to Norman Whitfield, The Zombies to Sun Ra, and Bo Hansson to The BBC Radiophonic workshop.

"Their sound is woozy, evocative and blatantly in thrall to the kaleidoscopic sounds of Broadcast, the BBC Radiophonic Workshop, Mazzy Star and 60's sci-fi soundtracks. It's beautifully listenable; a veritable tapestry of warm sounds to soothe and refresh. Their previous records have been popular but this could send them into the stratosphere" Norman Records

"Death And Vanilla's sound is like an elaborate dreamscape composed of foggy visions and mind-altering notions." Redefine Magazine

"Death And Vanilla are a Swedish haunted-pop duo who have found themselves caught in the vortex of retro-futurism circa 1969... they've got a good grip on the baroque psychedelia of the United States Of America and Free Design," Aquarius Records