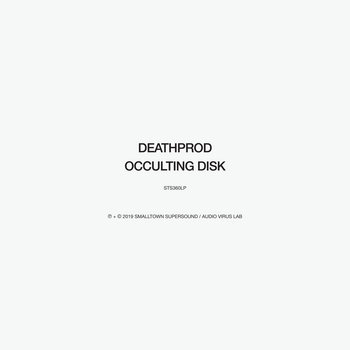 Occulting Disk is an anti-fascist ritual. Recorded in Oslo, Reykjavik, Cologne, Berlin and Los Angeles between 2012 and 2019. It is the first Deathprod album to be released since the 2004 album Morals and Dogma.  Liner notes by Will Oldham.  LP cut by Rashad Becker at D&M, Berlin.  Artwork by Kim Hiorthøy and Helge Sten.

"I remember driving over a mountain with my mother, she was in the passenger seat and we were being mauled and cuddled and battered and fried by sound; together. We were together experiencing something previously unimaginable, and we were facing the same direction, and we were moving through space and time knowing that a geographic destination some way ahead would bring an end. And the sound surrounded us, and for once our mutual silence was loaded with good. Because we were in the presence of each other, and we knew so much about how we had failed each other (it wasn’t a mystery any more), and we knew how we had maimed others when we worried too much about ourselves, how we had contributed to the faults of others simply by focusing in instead of out. Our mutual silences were laden with what that could only be called love. I used to hear love in music until I learned to hear love in sound."  (Will Oldham)