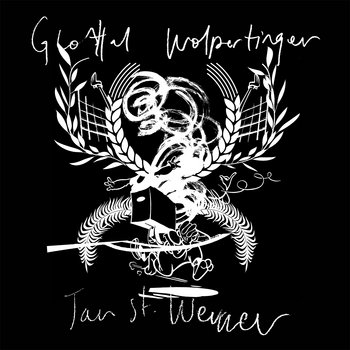 Glottal Wolpertinger was initially conceived as a radio installation for documenta 14, the world's most renowned event for contemporary arts, with each of the tracks broadcasting individually over the course of ten weeks and culminating in a convergence of all eight tracks at a performance in Athens. The pieces consist of microtonally tuned feedback, multispectral drones which Werner modulated and filtered with a purposeful, and indeed vocalized, emphasis given to the different frequencies and textures used. By naming the individual frequency bands, Werner defies traditional tuning systems and instead centers the piece on collaging variable elements. Sonic elements churn and sprawl across the tracks in constant motion. Their drones, combatting for space, entangle one another and oscillate into overtones that shift, build, and wither with fluid motion that blurs the line between consonance and dissonance.

Glottal Wolpertinger's incarnation as a recording is no less potent than its preceding forms, but serves as a continuation of the project's evolution as a distinct listening experience. Werner's apt title for the project embellishes the ambiguity and cognitive dissonance inherent with the work, as the wolpertinger is a creature of European myth which is said to be the mutated result of different species breeding under special circumstances in the Alps. Glottal intonations are those produced by the guttural and throat region of the body, the center of organic sound. According to Werner, the wolpertingers are "bastards, collaged freaks who exist in the grey zone of nature’s perfect plan," the same grey zone in which his pieces live.

Jan St. Werner is a critically acclaimed and internationally recognized sound innovator. In myriad ways – as a solo artist, a collaborator, through his group Mouse On Mars, as a producer, as a lecturer at MIT, or as a professor of Dynamic Acoustic Research at the Academy of Fine Arts, Nuremburg - Werner has challenged traditional approaches to creating and experiencing music. The sixth installment of his "Fiepblatter Catalogue series," Glottal Wolpertinger endeavors to transcribe the phenomenon of sound as anarchic and highly sensitive material. His multilayered presentation of the project highlights the ways in which sound and music can fluctuate and re-constitute depending on context all within one consistent work. In keeping with the series' collaborative nature, the pieces include contributions from guitarists Aaron & Bryce Dessner of The National.