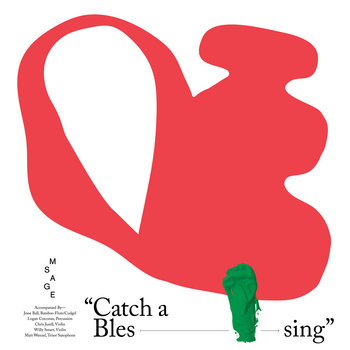 Matthew Sage is a composer, producer, label owner, and publisher based in Chicago, IL. Since his earliest recordings, Sage has carefully considered and crafted each of his various approaches to experimental music. His debut LP A Singular Continent was an endless epic that charted imaginative aural cartography and seemed to soundtrack actual worldbuilding. Now, after five years personal changes and growth, Sage returns with his tried and true sonic trademarks, but with a noticeably liberated approach to his brand of experimental studio music.

Catch a Blessing shows Sage in a much more impulsive light. Where past work existed in space that was cerebral, meditated, and composed, the music here is more natural, playful, and effort-less.

Opting for chance and the unknown rather than rules and conceptual rigor, Sage "practiced" an amorphous technique that led to profound moments of accidental, unplanned beauty. And the perks were plenty. As Sage explains: "Learning to know less and to just feel more about what I am making has become important to me. I like, or am learning to like, the possibility of that openness, that uncertainty. Not knowing. It is uncomfortable, but it is nourishing."

Recorded over a summer in a tiny room on the second floor of a 120-year-old apartment in Chicago, Catch a Blessing is the result of and the meditation on the exquisite exhaust and lavish lushness of his crumbling (and rebuilt) locales.

Presented as a collection of ornately expressionistic portraits of Chicago, Sage approached the album more as paintings or sculptures than musical compositions. Album opener "Avondale Primer Gray" unfurls a calm but vibrant quasi-melody that dissolves into a blur of found sonic objects both familiar unknown. "Lions to Baffle" is a semi-synthetic symphony of muted, sax-laden alien jazz, while "Elevator Straffing" maintains a whirling, glittering hum of echoed dissonance. "Claiming Air Rights" could be the literal sound of a piano floating through space, levitating despite an impossible weight. "Michigan Turquoise" brings an exquisitely eerie hymn with the same ghastly grace of Sparklehorse. Album centerpiece "Window Unit +Three Flat" is an open-ended epic of texture and ambiguity, immediately followed by the warped and trickling elegance of "Polish Triangle." "Wolfe Point Fog" closes Catch a Blessing with peculiar focus, departing with an open-ended and wholly optimistic focus.

The moods and modes are constantly, entirely at odds with themselves: private vs. public, abject vs. profound, rural vs. urban(e), and so on. Where other players of experimental studio music take a more high-minded, often stuffy approach, Catch a Blessing floats in airier, more refreshing modes. It’s endlessly lush but sincerely marked by decay. This is naturalism in the truest sense.

Out now on Geographic North.