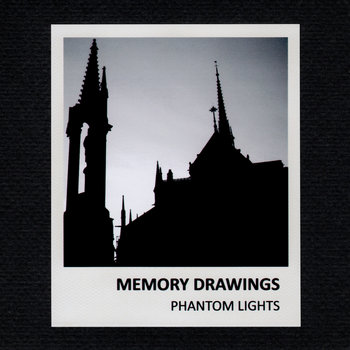 Sound In Silence is proud to welcome Memory Drawings to its family, presenting their new mini album Phantom Lights.

Phantom Lights, originally self-released by the band last year as a very limited tour CD and now getting a wider release by Sound In Silence, is a short form album that moves on from the marvellous sweeping The Nearest Exit album with a pick and mix example of what this band are good at. Memory Drawings continue to manipulate their dulcimer, guitar and violin sound into inventive new shapes and on the title track create their most vibrant moment yet. As on their latest album, the band's sonic palette is more expansive and unpredictable than their first two albums and after the addition of the polyrhythmic drumming and extra instrumentation from Chris Cole, they are now also joined by Yvonne Bruner (Big Hat) who provides some ethereal vocals on the last track of this mini album.
Phantom Lights consists of six tracks with a total duration of about 25 minutes. Four of them are new and unreleased, one is getting a release in physical format for the first time, as so far it was only available as a download on an older digital EP, and as with all their previous releases a remix is also included, this time from brilliant Bristol-based electronic composer Barnaby Carter.
Carefully mastered by Antony Ryan (ISAN) in Denmark, Phantom Lights is a perfect mix of post-rock, folk and modern classical, highly recommended for devotees of Pygmalion-era Slowdive, Hex-era Bark Psychosis, Tortoise, Rachel’s and of course mid period Hood recordings, Brave Timbers and Manyfingers.