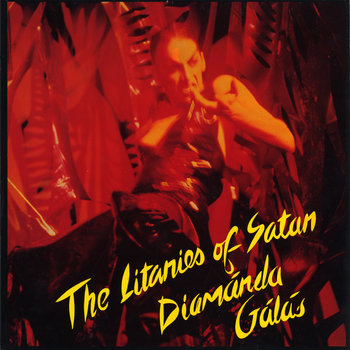 Diamanda Galás' debut album The Litanies of Satan, originally released on Y Records in 1982, is reissued on the artist's own Intravenal Sound Operations label in LP, CD and digital formats. The album has been meticulously remastered from the original Y Records analogue tapes by Diamanda and engineer Heba Kadry and features the original classic artwork of that release.  Vinyl includes poster.

This the first release in a new reissue campaign since Diamanda regained ownership and control of her entire catalogue in 2019.

-"The Litanies of Satan" (from the poem by Charles Baudelaire)
Devotes itself to the emeraldine perversity
of the life struggle in Hell.

-"Wild Women with Steak-Knives"
(from the tragedy-grotesque by D. Galás "Eyes Without Blood")
Is a cold examination of unrepentant monomania,
the devoration instinct, for which the naive notion
of filial mercy will only cock a vestigial grin.