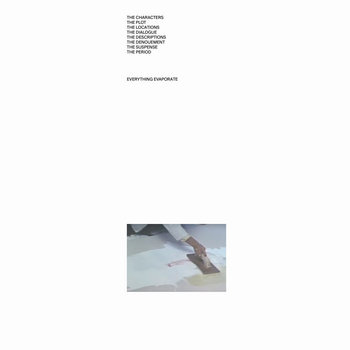 There is that instance, when you are passing over a threshold, where the before and after fall away and it is only the threshold itself that you are existing within - that neutral space of the in-between, of the transition, that becomes the actual lived-in moment. It is through fully occupying and being present in that transitional space that we are able to access new perspectives that allow for a reassessment of things previously thought understood. The five tracks that make up Everything Evaporate feel like a sustained moment of focus during a period of transition; a longer breath taken in that actual lived-in moment.

You find in the paintings of Helen Frankenthaler, when two colors meet, a bleed that washes out the boarder; a porousness that feels like a fleeting but significant transitory event. The idea of a "crossing" comes to mind - the willingness to extend oneself from one place out towards another. For Atkinson this willingness manifests through language and through the inventing of new stories as a method of reaching across and creating the possibilities for connection.

Spectral drones, gongs, bells, pianos and marimbas accompany Atkinson’'s voice, but now we also find laconic pitch-shifted conversationalists and digitally harmonized chanteuses joining in. As mesmerizing as the narrators voice is at the center of these tracks, it is the addition of other voices that produces the heteroglossic complexities. These are the voices that most often morph into pure sonic materiality; they exist just under the surface of the music creating texture and rhythm while occasionally pushing their way into the foreground with abstracted extrapolations. And it is through the summing of these many voices that a fractal image emerges, at once both singular and plural.

Everything Evaporate was produced after a year of travel and shows. It is, in a sense, a reassessed document of public performance with improvised studio interventions acting to break the linear stream of the live-on-stage temporality. There is a resonance between these in-studio improvisations of Atkinson's and Frankenthaler's paint pores: Before executing the performative action materials are considers, processes are devised and then, with fluid gesture, the event happens. In Everything Evaporate it is through a trust in materials, process and gesture that new melodies and language become available and new narratives pool and find form.

There are many moments within these piece that hint at the sensation of falling asleep while reading a novel - the stories, images and characters follow you into your unconscious but also wait for you on the page; you walk a liminal edge and wander that threshold of consciousness where the book and your imagination become intertwined. As this threshold is crossed your understanding of what has been given to you and what you have created for yourself is obscured, a new space opens up and new stories are revealed.