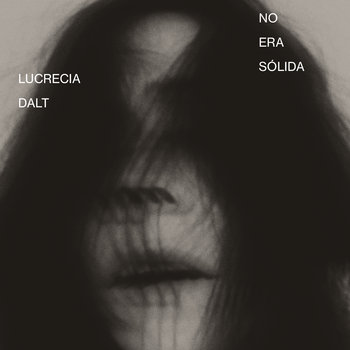 Lucrecia Dalt presents No era sólida, an introspective path to unworldly surroundings where self becomes sound, and a compass for the searchers of musical possession.

For her follow-up full-length to 2018's Anticlines, Dalt relinquishes control of the corporeal to reach imagination's outer realm. Where Anticlines framed the physical processes of matter changing state, No era sólida observes a transition in Dalt herself through the emergence of Lia: an apparition, or second self, of the artist as pure gesture and mimetic transgression.

In spectral suspension, Dalt becomes the medium between herself and Lia. No era sólida is a meeting place between these phenomenal and noumenal worlds: a diverse if not complicated landscape, but without a single solid form in sight. Swelling with cosmic oscillations and rhythmic tremors, the album’s sound materializes through new experiments with harmonic distortion in tape delay and Dalt's continued abstraction of percussion and pulse.

This atmosphere of auditory illusion is lush for vocal experimentation. In a mood stirred by griot singer Fanta Damba, Dalt produces wordless vocalizations guided by Lia's unconscious impulses. These ethereal murmurs channel a Surrealist’s automatism as Dalt dissolves language into an evocative collection of glossolalia. Her voice, possessed and processed, weaves through moments of No era sólida like a duplicitous organism playing hide and seek.

Each song identifies a different state experienced by Lia, opening with "Disuelta" ("dissolved") and transforming through pieces such as "Seca" ("dry"), "Ser boca" ("to be mouth"), and "Espesa" ("thick"). As the record progresses, Lia seems to emerge from primal, sensory states to the sentient and active conditions of "Revuelta" ("revolt") and "Endiendo" ("to understand"). These transitions signal a process of becoming, as Dalt conjures, and nurtures, a dormant being into life.

When No era sólida reaches its final title track, the spell of spoken tongue is broken and Lia can talk. Returning to the musings familiar to listeners of Anticlines, Dalt voices in her native Spanish a question posed to her by Lia: "Can paralysis transform a person into a thing?" The forbidden being fumbles lyrically through the nuances of her existence and newly-discovered senses, and wades through melodies of crystalline breathing and clicks of static like dust on a cylinder.

Lia's poetic reflections on the panspermia echo her origins, having come from some other ether. As a lifeform seeded through sound, the very essence of Lia is embodied in the exploratory instincts of her creator Lucrecia Dalt, an artist whose innate sonar system traces the far reaches of musical experimentation.

Lucrecia Dalt's No era sólida is available September 11, 2020 on vinyl and digital formats. As with Anticlines, a limited artist edition, designed by Will Work For Good, will accompany the vinyl release. Once again, a portion of proceeds from No era sólida will benefit Tierra Digna, an organization dedicated to the defense of Colombian communities affected by economic policies that violate human rights and devastate the environment.