Aufgehoben, "Fragments of the Marble Plan"

The follow-up to 2008's Khora, Fragments of the Marble Plan adds an electronic carapace to Aufgehoben's cataclysmic noise-rock foundation. The prevailing sound evokes the Mego label before it added "Editions" to its name and became enamored of American guitar mavericks—back when it purveyed cyclotronic, abstract electronic music that had the centrifugal force of an irrefutable Ph.D. thesis.

Such is the overwhelming power of Aufgehoben on the British group's sixth album that even exposure to the MP3s makes one relieved to have health insurance. Music this apocalyptic has few peers, but some approximate touchstones are the most radically "out" and knotty moments of Norwegian post-jazz ensemble Supersilent, This Heat after realizing that Brise-Glace didn't pay them a penny in royalties, or Farmers Manual after extensive immersion in Mainliner's back catalog. Fragments of the Marble Plan is a terrifying force of nature, a Rube Goldberg machine run amok, the sound of civilization atomizing into controlled chaos. It's so cold, it's hellish. Although Aufgehoben feels your need for catharsis, they convince you that being ready to jump out of your skin is the new normal.

If Aufgehoben prompted clichés, one would say that they "take no prisoners" on Fragments of the Marble Plan. This music is war—with all of the fascinating horrors and grisly casualties inherent in that endeavor. Get a helmet. 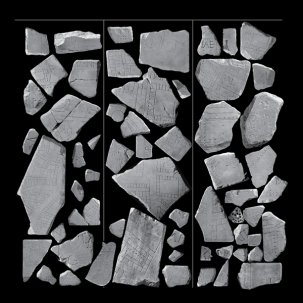