When I graduated college I embarked on a cross-country road trip, stopping at numerous well-known sites that numerous people from all over the world experience: The Grand Canyon, Graceland, the Hoover Dam, Niagara Falls, Devil's Mountain, Mount Rushmore, etc,... In retrospect, yeah, that was an awesome experience but now my taste buds yearn for something more, something compltely off the wall, some things I've heard of and some that I've never even dreamed of. Take Carhenge for example, located in nowheresville Nebraska, replicating Stonehenge but with cars. The Corn Palace, with a new design every year made entirely out of corn. I want to swim with dolphins in Florida, I want to go potato wrestling in South Dakota, I want to visit the 24-hour Elvis Museum in Portland, Oregon and NOW I HAVE MY GUIDE!!! Lookout, because the next summer when I have a video camera, money saved and can convince Rob Devlin to jump in the car with me and two more unnamed travellers, this will be our book. From the Central Maine Egg Festival to Cow Pasture Golf in Arizona and oodles of weird places and festivals in between, this book provides an amazing beginner's list of some of the most bizarre places and events completely unimaginable. If anything, at least this book provides some interesting factoids about this weird country for the Nordic wanderer or armchair traveller in all of us.
Tweet
10299 Hits

Mick Fish, "Industrial Evolution Through the Eighties with Cabaret Voltaire"

Mick Fish, confused that people might want a third edition of 'The Art of the Sixth Sense' wrote this instead. (All the text from the second edition is included in the appendices). It's an interesting, funny and depressing read that follows Mick following the Cabs from the early pre-successful days to the self-destructing, what-are-we-doing-here days of 'Groovy, Laidback and Nasty'. The whole book is about boom and bust: The Cabs' ascendency into the wealthy realm of EMI followed by weak records with no hits; the abusive power of the Unions causing their own demise at Mick's council depot; the boom and bust cycle of capitalism; the explosion and void of the music scene in Sheffield; the rise and fall of Industrial music; and finally Mick (and it seems almost everyone else's) further reliance on booze and drugs with the inevitable crash that that causes. On the lighter side, we get lots of inside information on the Cabs and other bands from Sheffield, all told in Mick's engaging, conversational tone. He doesn't brag and is honest with his opinions about others and himself. If you have any interest in any Sheffield band of the period or Industial music then this book is a must-read. The only down-side to the book is that it reports the truth - at the end of the eighties the Cabs split in all but name, and Mick left his previous life behind: the good times had been over for a while, the bad times had a few more years left in them. Today, Britain still hasn't recovered and the Cabs have failed to reform.

Originally published in 2000, this scathing indictment of the fast food industry has just been put out in paperback with a new afterword appended. The book started life as a two-part article for Rolling Stone magazine. Thankfully, Schlosser didn't stop there, and the result is a compelling read that leaves you feeling like you're witnessing something truly obscene but totally engrossing.
Continue reading
Tweet
10089 Hits

Mr. Almond really goes for it all this year. We've had Soft Cell, Stranger Things, various collaborations (even leading to an appearance at the Grand Prix de la Eurovision) and there's even talk of a Soft Cell CD and more in the can. "The End Of New York" is a selection of poems, prose and lyrics dating back to 1981, centering around his impressions of NYC. Nearly all of them have seen the light of the day in his previous collections "The Angel Of Death In The Adonis Lounge" (GMP, 1988 out of print) and "Beautiful Twisted Night" (Ellipsis, 1999) or on various recordings with the two exceptions of "Cats" and "Show World Girl". So at first sight there's not too much excitement coupled with this re-thought edition, but the included CD with him reading most of the selections and the images by Scott Ewalt should have made it a decent item for his followers and those new to his writings. Ewalt's works are actually better than the cover implies, based somewhere beetween Otto Dix and Pierre et Gilles in a very American kitsch style. Also featured are some black and white shots of NY by Marc himself which remain uncredited. The selection itself is no point of criticism; powerful and emotional writings with colorful images of his favorite subculture in his own style, serious attempts to push further in any directions. However, for the price of 23 USD / 15 GBP one could have expected a little more care with this Publication.
The CD contains a Reading of "The Puerto Rican Go Go Boy" which can't be found in print, also the Illustration is featured and to top it off it's indicated as "The Lonely Go Go Dancer" which is - vice versa - not read. Another illustration, starring Marc as a devil, remains uncredited and some details just pass by unmentioned. Titles have been shortened or altered and earlier comments like dedications or when and where written just disappeared without notice.
I'm wondering why he didn't read all of the selections. In 27 minutes he managed to read 75% of the material. He should have also taken some pauses between the selections, as the strength of the words do suffer through the haste you find yourself in while listening. Furthermore, the CD-sized package is somewhat disappointing. The two unpublished pieces don't add very much new or different to the whole picture and even the reading itself sounds partially like he had not found very much time for recording it in his undoubted busy schedule. It seems like Ellipsis were just too eager for a follow up to "Tainted Life" and so it (go) gos.
Tweet
11443 Hits

Fans of Jeff Buckley rejoice: the definitive biography is here. Also, fans of Tim Buckley rejoice, as this is a triumph of a dual definitive biography, chronicling the too-short lives and careers of father and son. David Browne, head critic for Entertainment Weekly and sometimes writer for Rolling Stone, has been granted unprecedented entry into the lives of these two men, joined by blood and marked by the same fate. Both died right when the promise seemed endless. Both died tragic deaths. And both died far too young. This book lets the reader into all facets of their lives: business, romance, upbringing, the best of times, the worst of times. Unique in its layout, "Dream Brother" begins with Jeff's death in Memphis, then switches focus every chapter from father's rise to fame back to son's. It's an amazing read, full of memories of those who knew each man, and the frightening similarities and also shocking differences in their paths. Of particular enjoyment are the minor details that fans of either may not know: an account of a particularly amusing exchange between Tim and Jim Morrison; Jeff's time in a hair-metal band while in Los Angeles, complete with photograph; Tim's attempt to reconcile with Mary Guibert, Jeff's mother; Jeff's secrecy about his father growing up, leading up to his first solo performance as Jeffrey Scott Buckley at -- his father's tribute concert at St. Ann's in New York. Fans will rejoice, yes, as they should. But even non-fans or those unaware of who either man is or of their music will find something to like in this book. It is at once a very moving, heartbreaking, and exhilarating view into their lives.
Tweet
11427 Hits 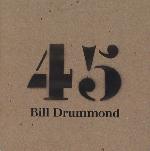 Bill Drummond is most known for his involvement in the KLF and related incarnates, but the guy has put in his time as a musician and record executive since the early 1980s. "45" was planned when he was 33 1/3 years old, in 1986 upon his release on Creation Records as The Man. The book collects various thoughts and observations of the music world around him through his experienced, yet jaded and cynical eyes. Various short stories provide basically a snapshot in his life at 45, including some of the bizarre attempts at cheating pop music and scoring well with the masses, comments on self-righteous and somewhat worthless musician pop stars. It's an entertaining and light read, with dimensions that would fit perfectly with other 45rpm 7" records. Worth tracking down even if you have to order it from the UK.
Tweet
9804 Hits

The sequel to the seminal, shocking and subversive compilation "Apocalypse Culture" is of somewhat biblical proportions; indeed, that most misunderstood and indigestible of all books is repeatedly refried to as a point of comparison by the cover blurb.
Continue reading
Tweet
17866 Hits

The room: An empty apartment, untenanted for over a decade until opened in the early eighties, everything in it waiting beneath a layer of dust, as if the owner has stepped out to the corner store and evaporated on his way back.
Continue reading
Tweet
10878 Hits

I've enjoyed Cormac James' writing since I was first introduced to his short stories by a friend and I've looked forward to reading his longer work it seems years now.
Continue reading
Tweet
9106 Hits

IN THE SHADOW OF THE AMERICAN DREAM

For nostalgic old fucks like me who continue to think Joy Division and Throbbing Gristle are relevant, the work of David Wojnarowicz seems no less compelling for his having died eight years ago.
Continue reading
Tweet
9844 Hits

What would you do if one day you came back from vacation & you found an extra closet in your home?
Continue reading
Tweet
8950 Hits

Early on in Jiri Grusa's novelistic reply to an employment questionnaire, while Jan, the narrator, is descending the steps from his prospective employer's office, he begins "to have a dream, or vision, or premonition, as is my wont."
Continue reading
Tweet
10073 Hits

KING OF THE CITY

MEMOIRS OF MY NERVOUS ILLNESS

A LOVELY TALE OF PHOTOGRAPHY: A FILM NOVELLA

There are plenty of critics out there who'd be happy to savage this book.
Continue reading
Tweet
14679 Hits

David Piniella
Books
IJ being what is known almost universally as a "Big Fucking Book" the mere sight of the damn thing can be daunting.
Continue reading
Tweet
55840 Hits

A catfish swims the rivers of the world seeking love. A prisoner poses as the Keeper of the Sultan's Vultures and Crocodiles to lull the sultan with stories of executions.
Continue reading
Tweet
10401 Hits

A collection of short stories by one of the best writers of our time.
Continue reading
Tweet
10298 Hits

DOUBLE OR NOTHING & TAKE IT OR LEAVE IT

Pulling out these two seventies titles by Raymond Federman is almost like reviewing old Beefheart albums--it's not as if they haven't been in print (at least off and on) over the years, but they haven't been given credit for the amazing (and funny) things they are.
Continue reading
Tweet
9335 Hits

While reading about the Vienna Actionists, I stumbled across a quote from Hermann Nitsch, "Trakl conveyed to me the slow and gentle passage towards, illness, death, and putrefaction." That did it for me; I shot out to buy this beautiful collection.
Continue reading
Tweet
11119 Hits
First Page Previous Page 1 2 3 Next Page Last Page