Feb 20 Posted by Stephen Bush in Interviews and Features

Ben Chasny released his first full-length record as Six Organs of Admittance in 1998. Since then, his recorded output has swelled to include about a dozen Six Organs albums. He has also toured and released music with Rangda, Comets on Fire, Badgerlore, Magik Markers, Current 93 and others. Ben spoke with Stephen Bush of Brainwashed about his latest Six Organs album, his ongoing work with Rangda and 200 Years, the philosophy of jazz collaborations, how to tell whether you're a hippie, and whether that elusive listener who self-identifies as a "Rangda fan" has ever been spotted in the wild.

Stephen Bush: Your new album, Asleep on the Floodplain‚Äîif you were to boil it down to one sound‚Äîis centered on acoustic guitar. Was there something that made you decide to go primarily acoustic for this album?

Ben Chasny: Yeah, I think so. The last record, Luminous Night, got so production-heavy in the studio with so many musicians that I wanted to get back to how much fun it was to record at home.

SB: Did that affect your writing process for the album‚Äîapproaching the songs structurally in different ways than if you were writing for something much more produced, or with more layers to it?

BC: It didn't really. All of the records done in the studio were always based on just the guitar, and then we would pile stuff on, and then we would take the acoustic guitar out, more or less, of a lot of the tracks, so the writing process was pretty much the same. It was more in the recording and the production, just keeping stuff out and trying to keep it acoustic.

SB: You dedicated the record to Jack Rose in the liners. Was there a particular influence that Jack's life and music had on the album?

BC: Well, Jack and I went back a few years. I did one of my first tours with him in 1999, so we were friends for a while. I just wanted to give a little nod to him, but that's about the extent of it.

SB: What was the recording process like for the album? It was home-recorded over a period of three years, and I'm curious how you took ideas and recordings from such a long time span and channeled them into a succinct, cohesive album.

BC: "S/word and Leviathan" I started a long time ago. That song went through all these different phases, and I released a version of it on CD-R‚Äîit was a tour CD-R, and there was nothing else on it. It was about a 20 minute long piece, and I thought maybe that was a little too minimal, so I kept reworking it. That was the earliest stuff that started in 2007, most of that long song. The majority of it was done 2008 and 2009 in Seattle.

SB: "S/word and Leviathan" stood out to me as different on the record, so hearing that it was recorded earlier and played around with more makes sense.

SB: I've heard the name "saz," but it doesn't conjure up any sort of picture in my mind.

I don't know where the saz originated from, but it's played pretty heavily in Turkish music and Persian music. If you look it up on the Internet you'll see a picture of it. You'll be like, "Oh, yeah, that thing! I've seen people play that!"

SB: Do you find that turning to instruments like that enhances your creativity, or forces you to work out of your element or find something different that you haven't done before?

BC: On that song it did. It's tricky to play with instruments like that because that really falls into psych-folk clich√© pretty fast when you start to mess with sitars and traditional, exotic instruments, so it's tricky. I've fooled around with that sort of thing every once in a while.

On "S/word and Leviathan," the static finger-picking goes on for so long, but then I pitch-shifted a bunch of different tracks, so that you get this automatic phase cancellation, but it's not electronics‚Äîit's just this natural phase cancellation. The reason I did that was to cancel out the clich√© psych-folk aspect of using an exotic instrument. 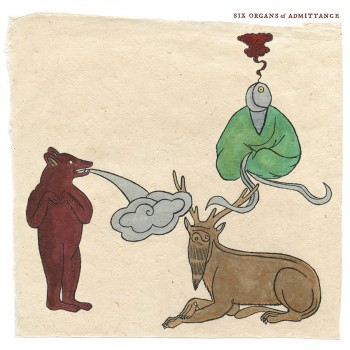 SB: How did the painting on the cover of Asleep on the Floodplain come about‚Äîthe mystic animal figures?

BC: That's my friend Steve [Quenell]. He's been doing most of my record covers since I started putting out records on Drag City. He did the Rangda record cover as well. The only record I've done on Drag City that he hasn't done the artwork to is Luminous Night. He's a friend from high school, and I know he does great art‚Äîhe's my secret weapon.

Since School of the Flower I've been calling him up like, "Hey, Steve! You wanna do some art for me?" "How long do we have?" "Well, you have... 48 hours!" And then we call each other at late night, and he's like, "What'd you want?" and I'm like, "You know, kinda like this," and then he'll get inspired. That's how the artwork came about.

SB: You've been releasing Six Organs records for well over a decade now. How would you say you have evolved as a songwriter and guitar player over the years?

SB: I mean, the albums have different touches, whether it's the free-psych nature of Rangda, or the production-heavy Luminous Night, or the new record, which is mostly acoustic. Have you seen your songwriting evolving along with the different sounds and productions?

BC: I don't really see it as an evolution. I see it as these different ideas that come from the same center. You know what I mean? You have a center. I've always envisioned it‚Äîyou have a center, and it's three-dimensional, and the trajectories come out from this center, and the center is evolving. I don't see an artist's trajectory as a two-dimensional graph or line, but I think it's what most people think of when they think about evolution in that certain way.

I mean, this sounds like hippie-speak, but I don't really see a clearly defined line from one record to another. If anything, I've tried to contradict each record‚Äîif one's really heavily produced, the other one won't be, or if one has tons of vocals on it, the other one will be more instrumental. It's a constant balancing act. It's tricky.

SB: It seems like a thread running through your albums is there's often one track that stands out as being much more free-form that takes up a good amount of a record and departs from the core sound‚Äîsomething like "River of Transfiguration" from The Sun Awakens.

BC: That record especially 'cause I envisioned that record as two separate halves.

I guess I do usually do that. Usually those pieces start off as really long, too. That's the secret to those pieces. It's always like, "That's it! This whole record is gonna sound like that! It's gonna be fucking great! It's gonna have 45 minutes of this song." Then I'm like, "Ah, I kinda like this other song. Maybe I should put that on the record." Well, I can't have just two songs‚Äîhow's that gonna work? I get a couple more short songs and then those long pieces always get shortened down, but a lot of the records start up like that.

SB: My experience as a listener is that your albums are no