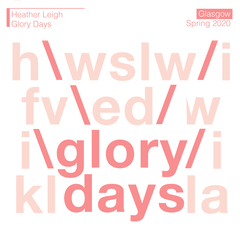 Composed, performed & mixed by Heather Leigh "at home with the window open” in Glasgow, the fifth release in our Documenting Sound series is a shocking half hour of music; a 13 track opus that is, by any measure, nothing short of a modernist folk masterpiece. Recorded quickly and instinctively in April this year and described by David Keenan as sounding like "a cross between Meredith Monk, DOME and A Guy Called Gerald," it continues to reveal new dimensions with every listen.

Heather Leigh is a musical polymath in the truest sense of the word; primarily known as an influential practitioner of pedal steel guitar, her work is impossible to pigeonhole - all-over-the-place in the best way, from collaborations with Peter Brötzmann and Shackleton to a properly mind-bending duo of albums for Stephen O’Malley’s Ideologic Organ and Editions Mego - hers is a sound that’s both highly sensual and aesthetically aggressive, beautiful and fearless, always exploratory.

Played on pedal steel guitar, synthesizer and cuatro, and featuring Heather Leigh's voice throughout, the songs here capture a sense of physical longing wrapped up in a boundless creative energy. What started out as hours of diaristic recordings quickly became honed and crafted into powerful and highly memorable songs - vast in scope and depth of feeling. It’s hard to fathom that these 13 songs were made on the hoof, they capture that most elusive of artistic qualities - a compulsion to evolve.

Working on this series has been a real eye-opener for us, a thought experiment turned real - what happens when an established artist is asked to produce material quickly and without much pre-planning or afterthought? The answer, so often, has been an immense pleasure to behold. But this one, this one’s unreal.