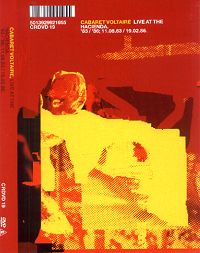 Months of wrestling with a DVD player which didn't initially read this disc has finally paid off and the results were well worth all the fuss. The first DVD to surface from Cabaret Voltaire takes two aural/visual snapshots of only slightly different periods in their evolution, recorded live in Manchester's infamous club.

lightning bolt, "the power of salad"

Peter Glantz and Nick Noe have managed to brilliantly document the worlds most phenomenal hardcore drum and bass duo on a brief 2001 streak across the USA. Providence, Rhode Island's Lightning Bolt have been playing and touring for only a few years but have built up a thunderous steam simply because their shows are beyond intense and their style is void of rock star attitudes and similarly retarted bullshit. Between songs and sets, this 75-minute film shows a window on the world of the smelly, loud, but charming and sincere world of the travelling Brians, playing in various rock venues, houses, and even somebody's kitchen in the sweltering heat of Lubbox, Texas nearly inside a refrigerator! If you're unfamiliar with Lightning Bolt's vicious onslaught, Brian Gibson's drums are fast and furious with a ratta-tatta-tap only matched by the precise execution of the heavily amplified three-string bass guitar by Brian Chippendale. A superb editing job by Nick and Peter effectively keep up with their ferver and make me long for the chance to see them again rather than sitting on my couch in front of the TV! I will even go as far as to say this documentary is miles better than a ton of things I've seen on the Sundance Channel, IFC, or the MTVs. Rockumentaries are not for the rich and famous any more thanks to the competitive digital video and DVD markets these days, and after seeing this, I'm completely surprised more indie labels aren't doing similar projects. I wholeheartedly welcome more adventurous labels and artists that want to share their personalities with their fans. With any luck, others will be smart and contact Peter and Nick to do the work... For a preview, check out Load's website.
Tweet
8776 Hits

Nic Doye
Home Theater
What is there to say about this program? Well, if your an obsessive who loves to know everything about a particular subject, then this program will definitely appeal. If you're not, then you probably don't have a record collection and aren't worth talking to.

Sean Graham
Home Theater
I struggled for a non-hostile way to start this review, but I eventually caved in:
In software circles, the term "Shovelware" refers to a piece of media (usually CD-ROM) that is full of whatever free software the publisher could find to fill up a disc. Nettwerk definately drew inspiration from this concept when releasing these piles of trash.
First a history lesson: When Nettwerk/Capitol released "Last Rights" in the US, there was a pressing error causing the entire disc to be shifted 39 seconds... Well, masters of ineptitude, Nettwerk has managed to do it again with their DVD release of "Ain't it Dead Yet?", completely skipping the entire intro and starting the video well into the song "Anger"... Nettwerk has admitted the error and recalled the defective discs. In addition, the cover art for the disc is stolen directly from the video, INCLUDING an error ("God's Gift Maggot" is REALLY "One Time, One Place", funny that they remembered to fix it when they reissued the CD...)... Beyond these clear examples of quality control mastery, this disc is as bare-bones as they come... Nettwerk literally pressed play on their VCR, and record on their DVD Mastering software, and added a menu screen. The video quality is less than superb, with definate compression artifacts and no attention to cleaning up the masters at all. The audio is two channel, and I am not even sure if it is up to par with the CD release of this show... Very disappointing.
The Video Collection disc is just that, 8 SP videos, shoveled onto a disc with a single menu as the "Special Feature". Again, this DVD is identical to the VHS release of the same name. Both the DVD and VHS are missing the video for "Worlock", but that is probably due to the fact that the video was almost entirely comprised of clips from various horror movies, and Nettwerk couldn't afford/didn't feel like expending the effort to acquire the rights. It also would have been nice for them to get the videos from "The Process", that aren't that difficult to get ahold of, but would have definately rounded out the disc. The video quality isn't too bad considering the age of some of these videos, and the sound is stereo, but a decent stereo...
Christ, even shoveling some video of their performance at Doomsday last year would have been throwing a bone to their consumers. But Nettwerk has again shown that they really don't care about their consumers or their artists... If you own the VHS versions of these two videos, don't waste your money on the DVDs unless you want to eliminate the scourge of VHS from your collection...
Tweet
10496 Hits

Staff
Home Theater
A good five minutes or so devoted to Coil. Some of it was for them to help explain Crowley, but presenter Matthew Collings did talk about their records and activities/interests. They were pictured playing with their modular synths on jagged rocks by the sea (!! I kid you not) and had footage from the Octoberish show I saw, when they released the _Constant Shallowness_ CD. Also had "How To Destroy Angels" as incidental music at an earlier point in the programme (talking about Crowley I think). The interview took place in their house.
The tone of the programme is very light-hearted and educational, and Coil seemed happy to be interviewed talking very broadly about bad guys in art, without going into too much depth about it. "Coil" in this incarnation was Sleazy, Balance, and (I think) Thighpaulsandra. TPS didn't say much.
I felt Coil didn't get much opportunity to speak articulately about their own ideas, but they were portrayed positively, and got a lot of screen time. Regardless of my own feelings about how good they are, I thought that, from an outsider's perspective, they did very well for themselves getting a significant mention on a programme otherwise only about Byron, Burroughs, Crowley, the Marquis de Sade, Manson (Charles and Marilyn [they had more time than CM and MM]), Jerry Lee Lewis, and Mick Jagger. I mean, _we_ may know they are culturally significant but you don't normally see them mentioned in the same breath as those people!
Tweet
9098 Hits

Enough of my reviews have come over the Brian for most of you to realize one thing: my reviews suck. So before I fumble to explain what makes Cowboy Bebop great, trust me on this one fact: Cowboy Bebop is the single greatest story-telling feat of the late-twentieth century.

I finished watching the 26-episode anime series for the second time yesterday and realized that people who dismiss anime as crap were missing out on a gem. Anime has been pretty much dismissed by western-culture as sexist, violent and mindless. And with some of the crap that reached our shores in the early-90's, yes, some of it does fall under that category.

But then there are masterpieces such as Neon Genesis Evengelion, Lain and the entire Miyazaki/Ghibli catalog.

And then there's Cowboy Bebop.

Most of the 26 episodes seem like stand-alone stories that could be watched on their own. And each one could stand on it's own. But all 26 together stand together as a work that I can only compare to Alan Moore's Watchmen as hinting at a larger, deeper picture.
It's hard to describe the show without it coming off as a "I've seen this before" type of sci-fi show. Only they never once spell things out for you, only hint at what's going on. No voice-over explaining how star-travel was allowed by an advanced gate system, or how an accident with one of the gates has rendered the Earth almost-uninhabitable. Instead you have to watch several episodes to get this. You've already heard this story before. Because that doesn't matter. Only the characters matter. By telling their story, does the world they inhabit get populated.

Each of the five protagonists have their own story. And none of their stories gets unfurled the way you would expect from the medium. Most of the story isn't even told, only left for you to guess at.

Oh, and do not watch the dubbed version if you have a chance. I decided to check out some of the dub on the final episode and none of the emotion came through.
The movie is due out in Japan this summer. I may have to take a trip there just for the opportunity to watch it on the big screen. Guess I'll have to learn Japanese, too.
Tweet
8628 Hits

Staff
Home Theater
The 25th Anniversary DVD of "The Exorcist" is absolutely REQUIRED VIEWING for fans of the film, arguably one of the most perfect movies ever made.
Continue reading
Tweet
9018 Hits
First Page Previous Page 1 2 3 4 Next Page Last Page