In Memoriam
Windy Weber
Today I heard a most terrible lie. Today I heard my good friend Jack Rose had died. It had to be a lie, right? But there it was, on the computer screen, in black and white. Very plain, very easy to read. Jack Rose was gone. For some of you that will mean nothing, but others of you will certainly know why I am now so sad, why my heart is so heavy and filled with grief. Jack was one of a kind, and for those of us who knew him, there will never be another. 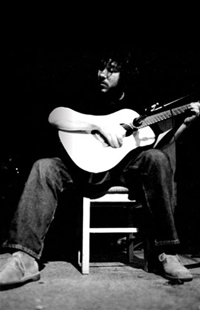 I had first seen Jack with Pelt in San Francisco at Terrastock in 1998. They were one of my favorite performances that weekend. Intense, heavy, psychedelic drone that took me right out of my body. From that point on, it was easy to bring any record they released into the shop, because I knew it would be amazing music that people needed to hear - that I needed to hear.

It was a while after that when jack came to play in our shop. I don't remember the details of how it was all set up, but Carl and I are friendly folk and already had Jack's solo records, which we loved, and it was easy to say, "Yes, come play here!" and you can stay with us after if you would like. No worries.

Jack showed up in the early evening, with that nervousness that comes from traveling alone, from playing shows, from needing to make it all work and work well. He came into the shop and was rosy faced, with long wild hair and a blue jean jacket on. He had his guitar in his hand. We introduced ourselves and shook hands, and sensing the nerves in Jack - the same nerves I have about any show I am doing, and about traveling, and being somewhere new - I said "I have a bottle of whiskey - would you like some?" and Jack smiled and said yes.

Not so many people came to the show that night, but those of us who were there were treated to greatness. Jack sat on the stage and played acoustic guitar and acoustic slide guitar with grace and ease. And an animalistic intensity. He would go from swirling finger picked gentleness to ferocity! You could almost see the waves of music coming off of him when he would play like that, when the emotion would overwhelm him and you'd wonder if maybe the guitar would crumble in his hands. It never did - Jack had a respect for his instruments as if they were his own creations, and he knew how to coax them into singing any way he needed to.

At the end of the night, our friend Brian came back to the house with us, and I told Jack I’d make him dinner, which he thought was funny because it was close to midnight. But I am a host who likes to spoil her guests, and Carl and I had an incredible garden that summer, so I cooked steaks on the grill and made salad with all homegrown veggies. He especially loved the cherry tomatoes! We sat in the living room and talked and ate, drinking whiskey and sharing stories of places we'd been and mutual friends, and of our love of guitars and good music. I asked Jack so many questions about his style of playing, and he brought out his slide guitar and handed it to me, along with all the steel finger picks he used, and he gave me a brief explanation of what to do. Good lord! The smallest pick he had would not even stay on my thumb! He had big bear hands - thick powerful hands that moved like ballet dancers when he played. I tried feebly to play without the picks, and gave up, but we all laughed and just enjoyed ourselves. We stayed up past three, laughing and talking.  Jack was wonderfully easy going. His records became the soundtrack to many days and nights in our home.

We saw him again in September of 2007, when he toured with Glenn Jones and they played songs together each night. We played at the Bohemian National Home in Detroit, with another friend from town named Nick Schillace. That was the night Glenn told us all about how acrylic nails kept his fingers in great form for playing, and the strength they allowed him. I had written some promo blurb for the show, and Jack said he wanted me to start writing his one sheets. I talked about his big bear paws that played the most wonderful guitar lines. I talked about his whiskey drinking and his rosy checks, his wild hair. About how magical it was to see him play. That night was no exception - Jack always played as if light was shining down from heaven, and in those rays he could create this sound.......hearing him that night in the upstairs ballroom was magic – the way his notes carried through the air and filled every space.

In June of 2008 we all played Terrastock in Kentucky together. Me and Carl, Pelt, and Jack. He also performed as the Black Twig Pickers, with Mike and Nathan from Pelt on percussion and fiddle. It was old timey bluegrass happiness - foot stompin', soul elevating music. Watching the guys together was seeing pure joy - their faces shone, they laughed, they acted silly, and in the midst of it made lively mountain music. God was it fun!! I was finally able to meet Laurie - Jack's wife, at the Louisville Terrastock. After years of hearing Jack talk about what a great woman she was and how much he loved her and how she helped him accomplish everything he wanted, it was good to meet her and say hello, to look her in the eyes and thank her for helping Jack make some of my favorite music. They were happy together, and Jack's performance solo was proof of that. It was so good to see him play.

I had often worried that Jack’s lifestyle was hard, and that his body was never a temple, that instead, it was a vessel for the soul that created with such intensity. Jack would not be Jack if he lived any other way. I had to tuck my mother hen instincts away when I would think about it.

We knew earlier this year that he and Laurie had finally bought a house, and that he was happy as a lark to be settling into it. He had some tours planned, some recording to do, and life was good. Jack was in a good place.

So today, when I read the most terrible lie, and then discovered it was true, I wept. I am still weeping. How is it that this wonderful man, who has been my friend, who has been a musical inspiration to me, and a companion on the road, could be gone? I am sad for his friends, I am heartbroken for Laurie, but I am especially heart heavy for myself. Jack was only one year older than me. Jack had so many more years to live, and so many more albums to make. My soul has been robbed of a dear friend, and it hurts. I don't want to imagine what life without Jack in my world will mean, what it will feel like, how all the music I’ll ever hear from him I have already heard. It’s not fair, as I know these things never are. It’s not gonna be easy, as death never is. Well, it is easy for the soul who has gone, but loss leaves the rest of us in such an empty place.

Jack Rose - I will miss you all of my days. Thank you for being the big bear with the big paws who played the most wonderful guitar. May you rest in peace.

With much love and respect