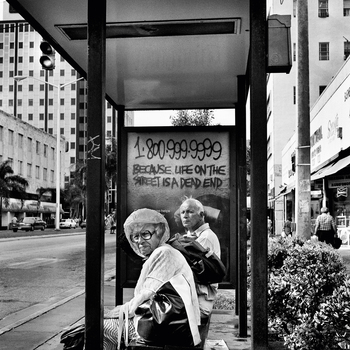 Millie & Andrea are Miles Whittaker (Demdike Stare) and Andy Stott, fellow labelmates at Modern Love who collaborated on an occasional series of 12" releases between 2008 and 2010.  It's been four years since we last heard from them, but they now return with Drop The Vowels, their debut album.  Produced fast and loose through late 2013 / early 2014, it's an album that recalls the strict and stripped funk of Anthony Shakir as much as it does Leila's incredible debut Like Weather, eschewing the dark aesthetic both producers are best known for in favor of something much more visceral.  It's an album borne from a love of both pop and club music, made to evoke an adrenalized, hedonistic, as well as emotional, response.

Opener "GIF RIFF" brings to life a Gamelan edit stripped bare before the over-compressed "Stay Ugly" breaks out with a tumbling, broken arrangement situated somewhere between Richard D. James and Jai Paul. "Temper Tantrum" and "Spectral Source" follow, versions of tracks originally released on the second and third Daphne EPs respectively, the former a rugged rave anthem tempered by blue strings, the latter a proper dancefloor destroyer recalling Shake's mighty "Madmen." "Corrosive" flits between a fillibrating, arpeggiated steppers rhythm and a brutal jungle breakdown, while "Drop The Vowels" further explores and strips bare bass & drums before the slow but jacking warehouse killer "Back Down" provides pure percussive abandon.  "Quay" ends the set with something quieter, a sublime coda made entirely from field recordings.