My Cat Is An Alien & Jean-Marc Montera, "Nuit d'Hiver" 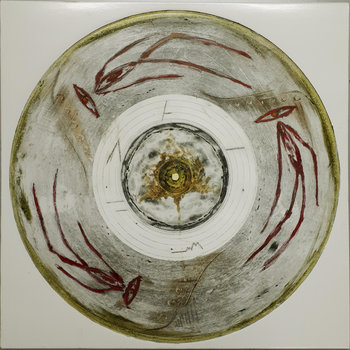 It was on a winter's night ('Nuit d'Hiver' indeed) five days before Christmas 2018, when My Cat Is An Alien and Jean-Marc Montera converged onstage to perform for the second time as a trio, proving once again their heavenly graced and powerful music-mind-soul connection. As it happened at their very first live encounter in 2015 (released by San Francisco cult label Starlight Furniture Co. under the title Union Of The Supreme Light in 2017), "Before jumping on stage, NO word was spoken about the concert we were going to play, nor even trying to figure out any sort of basic music scheme to be followed" recalls Roberto Opalio.

In 2018, at the opening of the final edition of the REEVOX-NUIT D’HIVER festival at GMEM inside the restored industrial complex of La Friche La Belle de Mai in Marseille, the spaceship-like dome of Le Module shook like never before. Nuit d'Hiver is a true musical hurricane of radical free jazz and "Spiritual Noise."

Brothers Maurizio and Roberto Opalio are world-renowned for their radical aesthetics of "instantaneous composition," their innate skill in creating articulated and ever-evolving improvisations that develop as if they were proper written scores from beginning to end. The same approach occurs in every duo's collaboration with other artists too—be they Lee Ranaldo and Thurston Moore of Sonic Youth, Italian electronic pioneer Enore Zaffiri or Hungarian avant-garde poet-performer Endre Szkarosi to name a few—as well as in whatever situation they might be invited to perform—including the opening of Venice Art Biennale or Milan Fashion Week.

Jean-Marc Montera is a revered guitar maestro whose skill in non-idiomatic improvisation surpasses the mastery of all his companions for his willing to explore new sonic territories instead of repeating classic formulas nowadays become too much "academic." Co-founder of GRIM (Groupe de Recherche et d’Improvisation Musicales) in 1978 and now associated artist of GMEM in Marseille, Montera debuted as soloist on legendary label FMP (Free Music Production).  Over the years, he has collaborated with many free jazz and avant-garde musicians including Famoudou Don Moye of Art Ensemble of Chicago, Fred Frith, Chris Cutler, Barre Phillips, Jean-François Pauvros, Pauline Oliveros and Christian Wolff, and set up several groups specializing in the interpretation of graphic scores by 20th century composers (Cornelius Cardew, John Cage, Earle Brown, etc.).