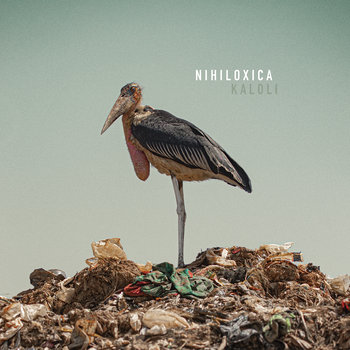 Kaloli is the debut full-length LP from Kampala’s darkest electro-percussion group Nihiloxica. The album marries the propulsive Ugandan percussion of the Nilotika Cultural Ensemble with technoid analog synth lines and hybrid kit playing from the UK’s pq and Spooky-J. The result is something otherworldly. Kaloli journeys through the uncharted space between two cultures of dance music, where the expression of traditional elements mutates into something more sinister and nihilistic.

The album takes its name from the Luganda word for the Marabou stork. Kaloli are carrion birds that can be seen amassing in areas of festering waste around the country, particularly in Kampala, with its heightened levels of urban pollution. Freakishly large in size and riddled with amorphous boils, growths and tufts, these toxic creatures thrive on detritus. Rising skyward on huge air currents, however, their wretchedness is softened as they effortlessly glide above the city. Nihiloxica tread a similar path to the kaloli: a dissonant, polyrhythmic assault on the senses holds a transcendental beauty.

Since 2017 the band have honed their sound in residence at Nyege Nyege’s Boutiq Studio in Kampala, one of the most vital cultural melting pots on the continent. Their debut self-titled EP for the acclaimed Ugandan label was an immediate success. An auspicious project between two UK musicians and a Kampala-based percussion troupe, Nilotika Cultural Ensemble, sparked a musical dialogue across continents with the aim to fuse two distanced cultures of dance music into one aural entity. The synergy between the group was instantaneous. The EP was composed, rehearsed and recorded with a minimal studio setup in the space of a month, giving Nihiloxica a rawness and brutality that pushed it into best-of-year lists across the world. However, this proved to be only a snapshot of what Nihiloxica were capable of. After a year of jamming together and road-testing material live on stage across the world, the second EP, Biiri, showed the band communicating with each other more freely. Their musical vocabulary was becoming ever more intricate. Now, after three successful European tours, this cross-continental conversation has brought us Kaloli.

Recorded with Ross Halden at Hohm Studios directly after a concert supporting Aphex Twin, Kaloli captures the vitality of Nihiloxica’s show-stopping live performances and magnifies it with pq’s honest, powerful production. For five days in September 2019 in Bradford, Nihiloxica laid down the bulk of the album: eight synthetic abstractions of the traditional folk-rhythms of Uganda. At the heart of every song is a groove, a drum pattern to be explored and developed. Each takes us through a different rhythmic territory: Busoga from the east of Uganda, Bwola from the north, Gunjula from the central region, Buganda.

The soundscape is dominated by the ancestral Bugandan drum set, consisting of Alimansi Wanzu Aineomugisha and Jamiru Mwanje on the engalabi (long drums - a tall Ugandan sister to the djembe), Henry Kasoma on the namunjoloba (a set of four small, high pitched drums) and Henry Isabirye on the empuunyi (a set of three low pitched bass drums). Wanzu also plays the ensaasi (shakers). One of the major additions to the sonic palette of Kaloli are the electronic drum sounds used more increasingly by Jacob Maskell-Key (Spooky J), providing an additional link between worlds, evident as electro-percussive punctuation on Salongo and Gunjula. The patterns beaten out by the ensemble are then explored harmonically and spectrally by the synths of Peter Jones (pq), stretching and searching for hooks and sounds among the rhythmic mayhem like kaloli picking and poking through decaying matter.

For their forthcoming release on Crammed Discs, Nihiloxica's dialogue reaches ever further into new areas. "Busoga" is dreamy and melodious, while "Bwola" plunges straight into armageddon. "Tewali Sukali" embraces the band's furtive heavy metal influences much more closely. With more running time, the band have been able to sculpt their most personal, revealing work to date: one that stands up as a true home listening experience. Giving listeners a further glimpse into Nihiloxica's musical process are snippets from rehearsal sessions that took place ahead of the recording in Jinja, near to where Nyege Nyege festival takes place. In the third and final of these interlude we witness Jally drop his engalabi in favour of a hand-made flute to lend the album a tranquil ad-libbed outro, accompanied by an evening chorus of Jinja’s plentiful crickets.

Once described by Gareth Main in the Quietus as "the best band on Earth right now," it's no surprise that Nihiloxica have plaudits from an esteemed list of sources. Notably by publications such as Pitchfork, the Guardian and Les Inrockuptibles, the group's sound has been widely described as eerie, hypnotic, floor shaking and body moving. With an extensive touring schedule ahead of them, including dates confirmed at Sonar and Dekmantel, Nihiloxica's Kaloli looks set to spread its wings in 2020.