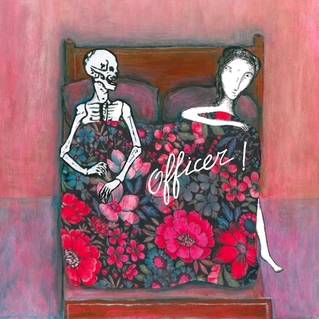 Blackest Ever Black presents to you Dead Unique, an album by Officer! recorded in 1995 but - outrageously, inexplicably - never before released into the public domain. This then is not a reissue or a revival; it's a new record that just happens to have been maturing in the cask for, oh, a little shy of 20 years. It also happens to be a lost classic of English art-rock, and the crowning achievement in the career of its mercurial creator, Mick Hobbs, who was closely associated with This Heat and their Cold Storage studio.

A complex but thrillingly immediate avant-pop song cycle that charms and confounds at every turn, Dead Unique will give immense pleasure not only to Officer!’s existing cult following, but to anyone with an appreciation of piquant, idiosyncratic songcraft – fans of Kevin Ayers, Flaming Tunes, Art Bears, Woo, Dislocation Dance, R. Stevie Moore, Robert Wyatt, Cleaners From Venus, Lol Coxhill or The Monochrome Set should especially pay attention. It touches upon ragged-raw rock ‘n roll, sumptuous chamber music, pastoral folk, blowsy prog-jazz and paranoid dub-space, effortlessly shifting from skronking abstraction to rousing harmonic refrain and back again.

Blurring the roles of storyteller, poet and prankster, Hobbs turns memorable line after memorable line, booby-trapping them with mischievous puns, fleet-footed literary allusions, sudden digressions and shifts of register, nonsense rhymes and other wordplay. But his acute wit and flair for the absurd is moored by a deep romantic sensibility, and though it delights in the minutiae of the human comedy, Dead Unique ultimately addresses its biggest themes: love, loss, commitment, independence, the mutability and inconstancy of all things. "You lose, you learn, you advance…but you always go back."

Brainwashed Celebrates 5 Years of The Eye

While the big boys are finally getting around to producing visual content, in May Brainwashed enters its sixth year of original video content known as The Eye. To celebrate we have two new segments this week, the Portland Oregon-based White Rainbow and Valet. Both leaders, Adam Forkner and Honey Owens, respectfully, have notable resumes in other groups, and both have new albums out now on Kranky.