"Dance of Death: The Life of John Fahey, American Guitarist"

John Fahey is to the solo acoustic guitar what Jimi Hendrix was to the electric: the man whom all subsequent musicians had to listen to. Fahey made more than 40 albums between 1959 and his death in 2001, most of them featuring only his solo steel-string guitar. He fused elements of folk, blues, and experimental composition, taking familiar American sounds and recontextualizing them as something entirely new. Yet despite his stature as a groundbreaking visionary, Fahey’s intentions—as a man and as an artist—remain largely unexamined. Journalist Steve Lowenthal has spent years researching Fahe'’s life and music, talking with his producers, his friends, his peers, his wives, his business partners, and many others. He describes Fahey’s battles with stage fright, alcohol, and prescription pills; how he ended up homeless and mentally unbalanced; and how, despite his troubles, he managed to found a record label that won Grammys and remains critically revered. This portrait of a troubled and troubling man in a constant state of creative flux is not only a biography but also the compelling story of a great American outcast. 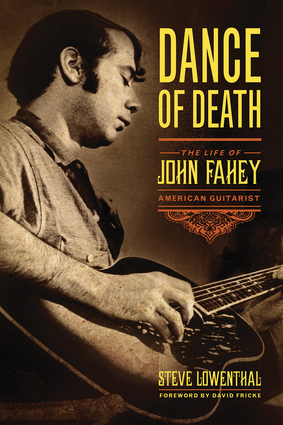