The greatest heavy metal story ever told—the complete tale of a life lived for metal. Part anthology, part memoir, and years in the making, METALION includes over 600 reproduction pages from every issue of Slayer Mag—Slayer 1 through Slayer XX, plus the precursor Live Wire zine—spanning from the early 1980s through 2010. In addition, author Jon Kristiansen recounts his life’s story, from alienated outsider to central figure in Norwegian black metal to metal party beast to world-weary metal survivor. The book also features over 100 rare photographs, including two color sections and a portrait gallery of photographs taken by Kristiansen himself.

For twenty-five years, Norway’s Slayer Mag published the gospel of black metal and death metal, combining eye-ripping graphics, brutally honest writing, and relentless offbeat humor. With this anthology/memoir, editor Jon “Metalion” Kristiansen unfolds the extreme highs and lows of a life lived for heavy metal. Founded in 1985 in Sarpsborg, Norway, Slayer Mag quickly rose to prominence by championing countless unsigned death metal pioneers. The pages of Slayer Mag exploded along with the extreme metal underground, and as black metal rose to prominence in Norway in the 1990s, Slayer Mag remained the final word on the moods and motivations of those dark times.

“From the start, I made Slayer Mag as honestly and as well as I could,” says Kristiansen. “I never knew any other way. I hope that I have produced something that will stand the test of time.”

“Presiding over the birth of extreme metal from its Scandinavian heartland, the first issue of the legendary Slayer fanzine was cranked out in 1985 and over the years shifted its coverage to provide an insider view of Swedish death metal and Norwegian black metal through their formative and most controversial years.”—Terrorizer

“For countless metalheads, the zine Slayer was a lifeline to a global scene. Founder Jon Kristiansen was deep into the scene in Norway, and is, to this day, one of the best primary sources for facts and stories about Mayhem, Varg, and what really happened back in the day.”—The Onion AV Club 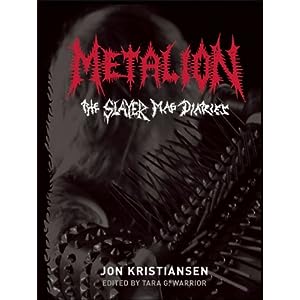