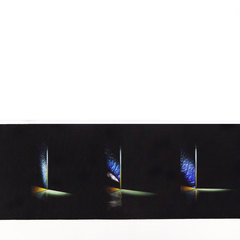 "Raime strain at the harness in four cuttingly sharp mutations of Afrobeats, Footwork, and Jungle with scintillating results on the 2nd release on their RR imprint.

Where the London duo’s 2018 EP and RR debut We Can't Be That Far From The Beginning evoked a meditative mood from the info overload of their home city that left acres of space to the imagination, the Planted EP rejoins the dance with four tracks that icily acknowledge strong influence from Latin American and Chicago footwork styles in a classically skooled mutation of hardcore British dance music.

In four fleetingly ambiguous dancefloor workouts they carry on a conceptual theme exploring the digital subconscious with persistently invasive, alien ambient shrapnel - half-heard voices, aleatoric prangs, and tag-covered signposts - woven into and thru their tightly coiled and reflexive drum programming.

Uptown, "Num" flexes tendons and hips like a Leonce riddim that danced all the way from NOLA and ATL to the wintery dawn of a LDN warehouse, while the lip-biting tension of minimalist 160bpm jungle/footwork patterns and jibber-jawed vocals in "Ripli" suggests the Alien film's protagonist lost in a mazy rave space, chased by H.R. Giger-designed face huggers (or gurning energy vampires).  Downtown "Kella" then catches them on a grimy dubtech bounce, cocked back and straining at the harness, before "Belly" shuts down the dance with invasive, demonic motifs exploding over dark blue chords and palpitating jungle subs with impeccable darkside style."