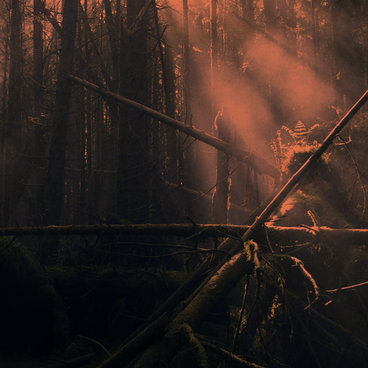 On June 5th, Subtext presents Kistvaen – the fourth solo studio LP by Roly Porter – which takes its name from a type of granite tomb found predominantly in Dartmoor, southwestern England. Scattered across the moorlands, the kistvaens were often found covered in a mound of earth and stone. They housed dead bodies, allowing them to lie facing the sun.

With Kistvaen, Porter speculates on the burial site as a mirror, or a gate in time. Excavating stories and images of ancient burial rituals, the record teases out similarities in emotional and social rituals between the Neolithic period and today. While a myriad of social, cultural and technological factors drastically differentiate our contemporary period and the end of the Stone Age, certain affinities may still be found in experiences of death across eras.

Kistvaen contrasts primordial motifs with that of the 21st-century life in designed environments and an evolving virtual existence. The music blurs boundaries between field recording, folk instrumentation and digital processing, which although beatless creates a profound effect using dark ambiance, deep electronics, and immersive sound design. This is otherworldly sonic necromancy, where long dormant spirits are evoked, summoning an extremely heavy presence.

The pieces that comprise Kistvaen were developed for an AV performance of the same name with visual artist MFO, which has appeared at Unsound, Berlin Atonal, and Sonic Acts. The long-player was recorded during various rehearsals/performances and also at BinkBonk studios in Bristol.