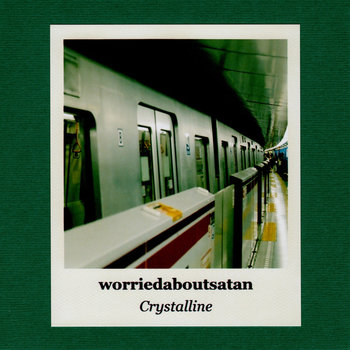 Sound In Silence is happy to announce the addition of worriedaboutsatan to its roster of artists, presenting his new album Crystalline.

worriedaboutsatan is the electronica/post-rock project of Gavin Miller, based in Bradford, UK. Formed in 2005 in Leeds as a side project for Gavin Miller, while he was member of the post-rock band Johnny Poindexter, worriedaboutsatan turned into a duo when Thomas Ragsdale, also member of the same band, joined the project and became their main focus after their previous band split up in 2006. As a duo, and until 2010, they released an album on Gizeh Records, a self-released remix album and a series of singles and EPs, either self-released or on labels such as Denovali Records, on which they also released a vinyl version of their debut album, and You Are Not Stealing Records. In 2011, the duo launched a new electronic project, Ghosting Season, and put worriedaboutsatan on hold. Ghosting Season released two albums and some more singles and EPs on labels such as DJ Sasha’s Last Night On Earth, Max Cooper’s Fields and their own This Is It Forever. In 2014 the duo abandoned the Ghosting Season project and returned to worriedaboutsatan full time. From 2014 to 2019 they released four more albums and several singles and EPs on their own label and others such as Wolves And Vibrancy Records and Burning Witches Records. In June 2019 Thomas Ragsdale left the band to focus on his solo career and since then worriedaboutsatan is comprised solely of Gavin Miller.