Zoviet France, "The Tables are Turning" 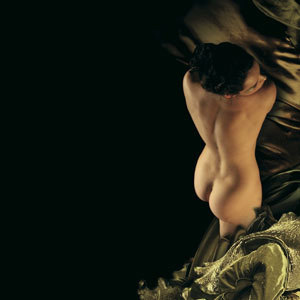 Somewhere in the rainy, misty forests of the Pacific Northwest of America, three ladies have the unlikely task of sewing together the packaging for a new album by Zoviet France.

The Tables Are Turning, released by Soleilmoon Recordings on November 18, consists of recordings from the soundtrack to the contemporary dance production, "Designer Body."  The dance, premiered by British dance company, Ballet Lorent, in 2008, explores the transformational relationship between humans and the clothing they wear.

Seven dancers, performing on continuously rotating plinths, slowly remove layers of their costumes, revealing the sensuous nude bodies beneath. The music accompanying the dancers is by turns dense and moody, then lyrical and soaring, underlining the mounting vulnerability of the dancers as they undress.

Liv Lorent, Ballet Lorent's artistic director and choreographer, spoke with Kelly Apter, writer for The List, saying "At the beginning, the body is the most designed it can be. They're wearing hats, coats, heavy costumes and make-up – all the man-made and artificial things we do to disguise ourselves everyday. Then, over 18 minutes, we take it all away. And because there are several layers, there's a real sense of metamorphosis."

The members of Zoviet France, who prefer to remain anonymous, write “We've known Liv Lorent for a long time. When she started to conceive 'Designer Body,' which she wanted to be a hybrid of contemporary dance and performance art, she decided that an unconventional performance needed an unconventional soundtrack. The composition of the soundtrack and the choreography evolved alongside each other so it became a dialogue between Liv and ourselves. The main inspiration that we took from the production's concept was rotation; throughout the one hour performance, the dancers are located on turntables that turn continuously, at varying speeds and changing direction. We mirrored this in much of the soundtrack, with circular and rotating sounds."