Here it is! The definitive list of lists. Why? Because it's the tenth year in a row that the readers nominated and voted!  This is what you—not self-important hipsters or jaded old critics—picked, unaffected by the corporate ads and silly trends. 2007 was an amazing year for music, our poll had a ton of excellent entries, and once again, the cream has risen to the top.

Single/EP of the Year 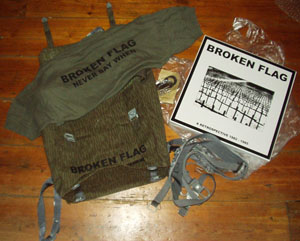 Recording label of the Year

This poll category numbers were tabulated from total points given to their collective total of releases. This poll category numbers were also tabulated from total points of their new releases.

As chosen by the Brainwashed staff and contributors.

"They haven't stopped raising the bar from themselves (and usually used the bar on some piece of metal to make a rhythm). In 27 years they have released over 20 studio albums, each one mapping a new musical topography and each one reflecting a different facet of their home city at a given moment in time. They are heavy but tender, loud but restrained, danceable but intelligent, clever but not too pretentious and most importantly consistently brilliant."  - John Kealy

"Too amazing to live in the shadow of Nick Cave, Blixa Bargeld somehow figured out how to go from an acned noisemonger into one of the most formidable frontmen alive.  Romantically nuanced yet enigmatically charismatic, the former Bad Seed thankfully continues to lead this amazing band of experimentalists softly down a creative road not yet travelled." - Gary Suarez

"Rather than stagnating with their sound, they continue to evolve and develop and still manage to be as frightening, captivating, playful, and overall entertaining as they were back in the Stahlversion days.  The subscription model they’ve also employed in the past few years is also revolutionary in the amount of fan interaction that takes place.  It’s great to see a band that does realize it was the fans who got them to where they were and continue to support them" - Creaig Dunton

"Their music, their uncompromising approach to making it and their sheer tenacity plus the continuing drive to innovate and forge new paths means that, unlike many in the ‘music’ scene today, their name (however difficult to get your tongue around) will always be associated with fresh new musical explorations and directions." Simon Marshall-Jones

"It's hard to argue against Neubauten: the consumate innovators and experimenters.  For a band who could probably coast on the value of their brandmark alone, Neubauten continues to take risks, and that's what the best artists always do." - Matthew Jeanes

"From their raw junk yard racket of Kollaps to the symphonic din of Perpetuum Mobile and now the off kilter pop of Alles Wieder Offen, EN continually destroyed what was in front of them, and left behind better, more beautiful things. For nearly 30 years, "Destroying New Buildings" has not only been an appropriate name, but a credo that they have stood by, and surpassed any expectations of." - Michael Barrett

"One of the most inventive bands ever and the only one capable of serenading me with a chainsaw, sand, and power tools. I would like a song employing a yankee screwdriver, however. You know, for the sake of completion. I still find myself listening to records released throughout their career and that in and of itself says a lot. Many bands have periods of real inspiration and genius, but EN's entire career captivates me. I wonder how you spell integrity in German." - Lucas Schleicher The Absolutely Worst Album of the Year

These were the most negatively rated full-length albums in this year's poll.

Thanks again to all who participated and we wish you the best for 2008.